Is Microblading For You? 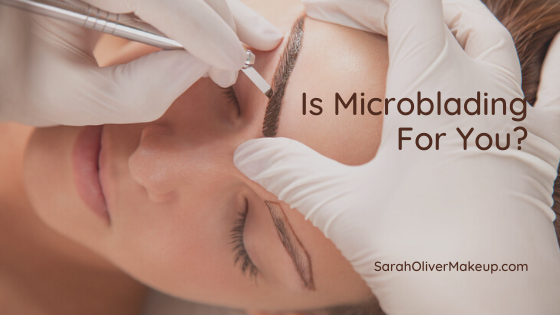 Microblading eyebrow is like permanent makeup in that it creates natural, beautiful eyebrows. Microblading is perfect for people who have overplucked or those who want to define, darken or reshape their eyebrows.

Microblading originated over 20 years ago and has been called by many names: hair strokes, nano stroke brows, feathering technique, microstroking, and even “eyebrow embroidery.” Recently, Microblading resurged and became an overnight trend in 2015, and it has changed the way we are designing and enhancing eyebrows. So naturally, being an artist, I am super excited!

In case you’re wondering – yes, microblading is a form of eyebrow tattooing.

The new wave of information speaks of microblading to be unlike traditional tattooing, which uses a machine. With microblading, today’s artists have a plethora of needle configurations, varied in the number of needles that make up the blade and the configuration and size of the needles. Hairstrokes are applied with a handheld microblade producing a very fine line that resembles natural hair. Each individual hair stroke is hand-drawn and blends with the client’s existing eyebrow hair. With an experienced artist at the helm, your results will be gorgeous and take years off your look.

There are many techniques and approaches to microblading.

The variations are unlimited as each individual is a new canvas. In addition, skin age and health will indicate the microblade’s actual depth varies on each hair stroke, creating an even more dimensional and natural result. Each approach is valid and part of the art of microblading. And guess what? I have found microblading techniques a new and surprisingly great way to correct microblading, which has been poorly applied or placed.

While I recommend a consultation before any permanent makeup or microblading application, Microblading typically takes two appointments to complete. The first application takes place after the client is profiled and the eyebrows are drawn on with a waterproof pencil. Once the artist and client agree on the look, the artist then microblades the eyebrows. And the client is good to go. Initially, there is some mild flaking where aftercare is required, but your microblading is completely healed in less than 30 days.

The second appointment is a follow-up approximately 4-6 post the first application. It’s important to allow time for the pigment in the upper skin layers to slough off and let the color settle into your skin. Then, again, the artist can see how your skin has received the pigment in the touch-up appointment, making the necessary corrections.

Occasionally a client’s skin undertones may have unexpected effects on the healed color, especially if the skin is medicated or has been worked on previously. As a result, it’s not uncommon for the artist to add color to adjust and refine the design. These corrections are normal with any microblading artist and an essential part of the process, as everyone’s skin is different and receives pigment differently.

For more information or to see how you can achieve microblading correction to get the look you desire, schedule a FREE, no-obligation consultation.